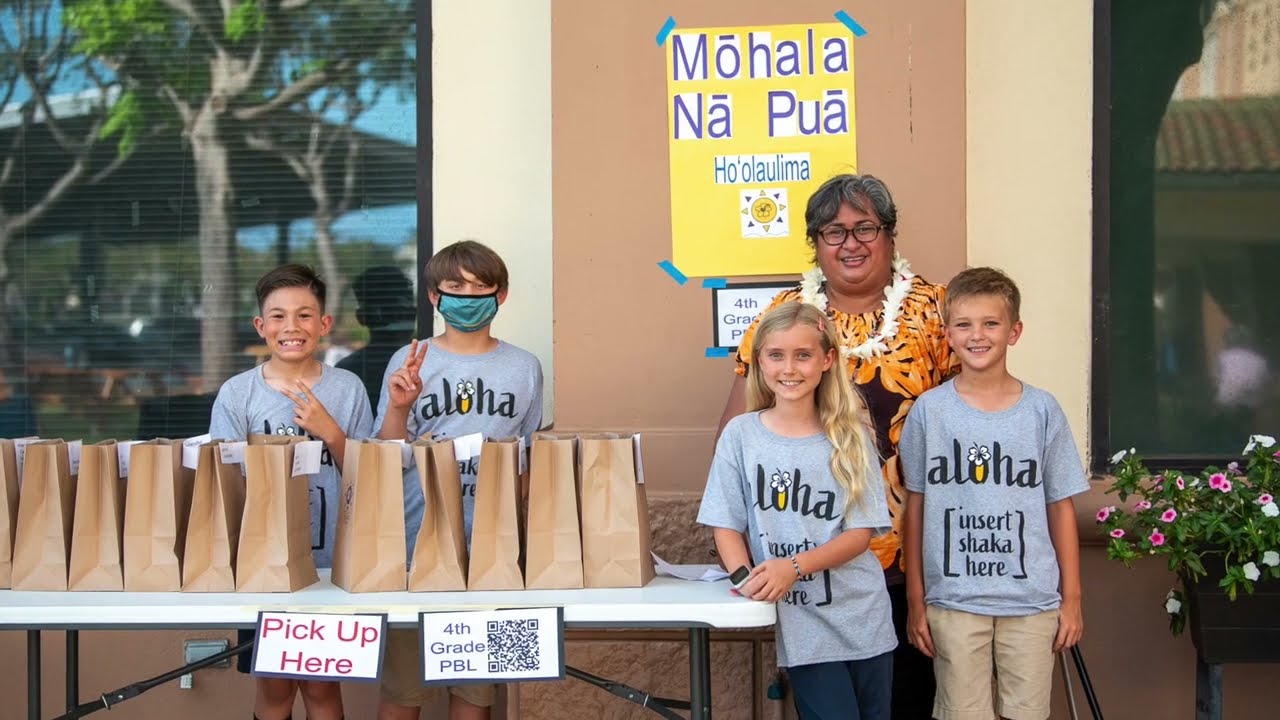 Elementary and Secondary students took the opportunity at Island Pacific Academy’s Night Voyage gala on Thursday, November 10, 2022 to share their mahalo to Lance Wilhelm, IPA Trustee Emeritus, alumni parent, and builder of the IPA campus. Wilhelm was honored at the event with The Hokupaʻa Award for exemplifying the vision and values of Island Pacific Academy and for his steadfast commitment to the betterment of the school, as well as his extraordinary contributions to education in West Oʻahu and the entire State of Hawaiʻi.

Grade 5 students and U’ilani Reynolds, Elementary ʻŌlelo Hawaiʻi teacher, recreated the lovely canvas pouches they had produced for their Grade 4 marketplace last year. The students spent time over the several weeks before the gala hand-stamping a custom Hawaiian ahupuaʻa design on the canvas pouches. Working in pairs, one student would carefully roll the paint onto the stamp, and the other student would meticulously center and press the stamp onto the canvas. At the event, each of the more than 400 guests was gifted with one of the special pouches, beautifully wrapped and presented at their place setting, as a take-home favor.

The students also created a video relating the story behind the special makana, or gift, and all they had learned about economics and Hawaiian culture through their project-based learning. At the event, Sophia Boone ‘30, Ariel O’Beirne ‘30, Kennedy Oshiro ‘30, and Wyatt Stockmaster ‘30, spoke about the makana and shared the video with the guests, showcasing the engaging hands-on learning students experience at IPA.

“This opportunity to help with the gala gifts really allowed the students to share their story with a wider audience,” shared Reynolds. “They showed the aloha they have for their company and their products through this experience.”

“My classmates and I, along with our kumu, Mr. Andrade, put together an art piece that resembles the Hawaiian star compass. Together we came up with the theme and the design, and we created it with our own hands,” shared Akana. “We had lots of fun, and we made a lot of mistakes along the way, but that’s all part of the voyage.”

The piece highlights the Hawaiian star compass – with the seven houses Lā, ʻĀina, Noio, Manu, Nālani, Nā Leo, and Haka – in the center. A smaller circle in the upper left represents the rising of Makaliʻi (the constellation Pleiades) in November, marking the beginning of the Makahiki season and the Hawaiian new year. The moon, Mahina, represented in the lower left, with the sun, Lā, in the upper right corner. A crab-claw sail in the lower right corner, represents Hōkūleʻa, the Star of Gladness.

The ceramics students were involved throughout the entire process, from rolling the clay sheets, cutting out the pieces, firing, glazing, grouting, framing, and finishing with the fine details.

“The students and I felt privileged in creating our interpretation of IPA’s Star Compass mural and how its connection to Polynesian voyagers, and Mr. Wilhelm, continues to inspire us,” shared Andrade. We were honored to have gifted such a meaningful piece of art work to Mr. Wilhelm, as he is a pillar to the foundation, spirit, and vision of Island Pacific Academy. Through this project, we were inspired in our hearts to never lose sight of our goals and dreams!”

Mahalo and kudos to the students, and their teachers, for representing IPA so well to our greater community!