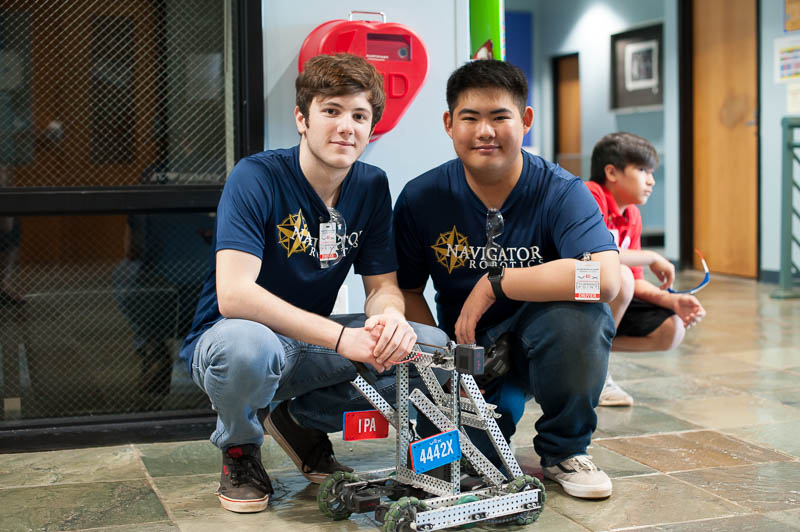 It was an amazing day on the ISLAND PACIFIC ACADEMY campus this past Saturday, September 29, as 26 high school robotics teams from around the State of Hawaiʻi converged to compete in the VEX Robotics Competition hosted by IPA.

Robotics teams from around the state came to compete at IPA.

The IPA Navigator Robotics team, led by Coach Doug Blackington and mentors Maddie and Bob Cabuslay, was a gracious and accommodating host for the visiting teams. The well-organized, all-day event included a concession stand, team rooms, practice fields, and air-conditioning. IPA parents, students, faculty, staff, and alumni volunteers were on hand to help make the competition a successful event.

The entire Navigator Robotics team was on hand to help with the many tasks required for hosting such a large competition.

Navigator Robotics had two teams in the competition, Team 4442X and Team 4442A, both of which competed well. Team 4442X, comprised of David Pavlicek (’20) and Brian Lu (’19), won the prestigious Judges Award for design, programming, and strategy. Team 4442A, with Nathan Okimoto (’22), Zaheer Gulko (’22), and Ryan Corpuz (’22), was named Tournament Champions, with their alliance partners, Team 2437A, from Sacred Hearts Academy.

Zaheer Gulko (’22) makes sure their robot is ready to compete.

#FBF IPA’s wonderful Elementary teachers let their students know they’ll always be there for them in this special end-of-the-year video. We miss these amazing educators! ow.ly/SbgT50An9lR #ipahawaii #weareinthistogether #distancelearning

On IPA’s Make a Difference Day, secondary students give back by volunteering at community organizations. This year students did beach clean ups, worked a lo’i & took care of their own campus. ow.ly/4iOe50An6QO #ipahawaii #ipagivesback #communitycounts #makeadifferenceday pic.twitter.com/uzVhUPN5SG

IPA’s rising Gr 4 student Ozzie was featured as the “Kidcaster of the Week” on @HawaiiNewsNow. The Grade 3 class completed their unit on weather this spring through distance learning. Nice work, Ozzie! #kidcaster #hnn ow.ly/C3gO50AmtA3