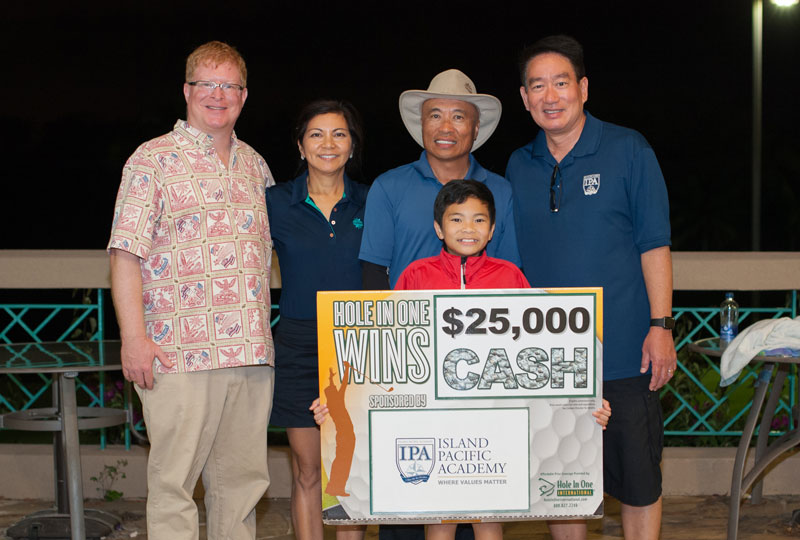 ISLAND PACIFIC ACADEMY hosted its 10th Annual Golf Tournament at Coral Creek Golf Course last Friday, February 10, 2017. The tournament was a wonderful success in many ways – funds were raised to support the IPA Athletics Department and Financial Aid Program, golfers enjoyed a great day on the course, and many volunteers came out to show their support for our school.

And, for the first time in the 10 years of the tournament, a golfer won the Hole-in-One Grand Prize! IPA parent Chito Alcantra used his 6-iron on Hole #13 to hit a 158-yard tee shot onto the green, where it bounced once and dropped into the cup for a hole-in-one and $25,000 cash prize! It was a great win for the Alcantras, and a highlight of the tournament!

“This was really a wonderful event and I heard so many positive compliments from the players. We were all so excited that an IPA parent won the Hole-in-One prize!” shared Gerald Teramae, Head of School. “I really want to thank all of our volunteers and staff, who worked very hard to make this tournament successful. It certainly showed in the outcome of the event.”

ISLAND PACIFIC ACADEMY thanks all the golfers, sponsors, donors, and volunteers who helped make the 10th Annual IPA Golf Tournament a success. More than 70 golfers came out to hit the links and support the many programs offered at IPA.

“We had such great support again this year from so many,” said Charmaine Hauanio-Kuewa, Director of Advancement. “The success of the tournament is only possible through all of our generous sponsors and donors, and the many wonderful volunteers who spent so much of their time helping us run the tournament.”

Hauanio-Kuewa also credits the hard-working golf tournament committee who volunteered much of their time and energy in promoting the tournament, soliciting prizes, and bringing in new donors and sponsors. “We are so fortunate to have these IPA parents, who are also professionally involved in the golf community, share their time and talents with us to help put this event together,” she said.

There was a lot for the golfers to enjoy throughout the day, both on and off the course. Players were pampered with a free chair massage by Rebound Hawaiʻi, a swag bag of great gifts, a special Hawaiian bento lunch generously donated by Diamond Head Seafood, on-course delivery of individual poke bowls from Hawaiian Poke Company during the second half of the round, and a dinner buffet at the awards banquet.

Participants also had the opportunity to win one of 50 fabulous raffle prizes, including a Kauaʻi golf get-away for three with room and airfare, a 55” Samsung SMART LCD TV, dinner luau tickets at Paradise Cove, and rounds of golf at many beautiful courses on Oʻahu and the neighbor islands. Each player was given one entry to the raffle with their registration, but many were excited to increase their chances of winning by purchasing additional raffle tickets by the arm’s-length before the tournament.

Eric Carson (IPA parent ’17, ’19) enlisted the help of his teammates to take “arms’-length” to the limit to purchase his raffle tickets.

Tournament prizes this year were awarded to the 10th, 13th, and highest-scoring teams, as well as the lowest-scoring finishers.

“We wanted to make sure everyone had a chance to win something in the tournament,” said Hauanio-Kuewa. “We selected the 10th and 13th places for our top prizes since this year marks the 10th year of the tournament and the 13th anniversary of IPA.”

“Our last place finishers also lucked out!” joked Hauanio-Kuewa. “They got some great prizes including rounds of golf at the Kāneʻohe Klipper, gift cards to Fresco’s Italian Restaurant, and golf lessons from the Klipper pro!”

IPA students Jordan Carrancho (’18) and Steve Cleveland (’19) assist with the Putting Contest before the shotgun start of the tournament.

Keith Ogata (IPA Board of Trustees member) gets ready to tee off on a Gold Sponsored hole.

Mike Rompel (IPA parent ’22, ’28) and his golfers from Domino’s Pizza wait beside the green for one of their teammates.

These golfers enjoyed their round!

With a score of 59, Leland Lindsay, Anna Murata, and Todd Murata were the low net-score winners and will have their names added to the IPA Golf Tournament perpetual trophy.

The low net-score winners had fun out on the course.

In addition to the traditional finishers’ prizes, golfers could compete for prizes in the Putting Contest and several course contests, including Hole-in-One and Closest-to-the-Pin on the par-3 holes, Men’s and Women’s Longest Drive, and Most Accurate Drive.

A golfer tees off on a par-3 hole.

We’re already looking forward to our 11th Annual Golf Tournament next May at the Kāneʻohe Klipper Golf Course! We hope to see you all there!