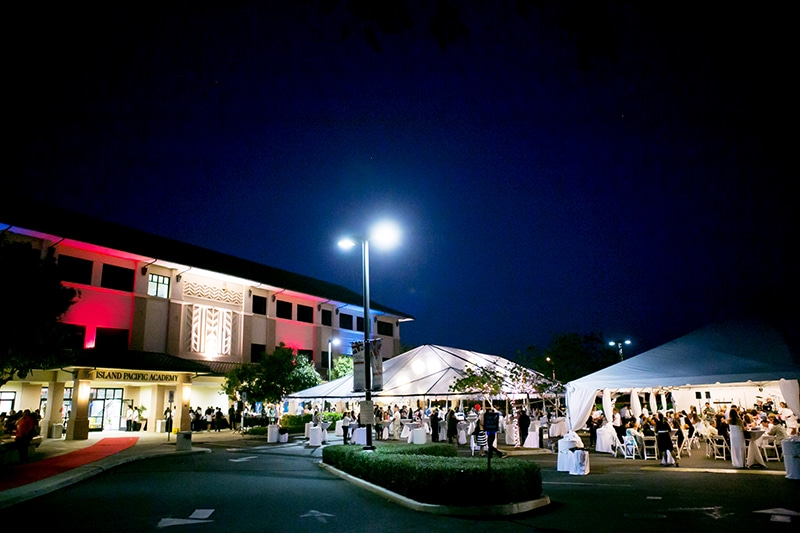 Island Pacific Academy’s 11th annual Spring Benefit, held mid-April, was a successful and well-attended evening with over 500 people filling the campus. Almost $150,000 in revenue was generated with proceeds supporting a myriad of programs at the school including:  Financial Aid, the Playground renovation fund, IPA’s Annual Fund, and Project Grad (for the rising senior class).
Grand Expedition 2015 “A Night in London”  brought the event back to the campus after 8 years in the Ko Olina resort. “Our usual venue was under renovation, “explained Head of School, Gerald Teramae.  “This presented a challenge but also a terrific opportunity to bring the event back to school showcasing our students and IPA. A core group of staff and parent volunteers worked to transform the campus into a “bit of Britain” for just one night.”

Guests were impressed from their first step on campus with valet car-park service, a live musician strumming hits from the’ 60’s and ‘70’s, and a champagne greeting.  A bold red carpet marked the way to the check-in area and entry to the silent auction.  Themed decorations featuring the Union Jack, the ubiquitous red phone booth, blue police box, and even Big Ben, worked to whisk attendees “across the pond” and into the heart of London.

Students in high school grades 9-12 volunteered during the event and were key to the successful outcome of the evening. Seniors were on hand to help for those that needed assistance with mobile bidding. Members of the junior class helped to serve the corporate sponsor and full-tables. Sophomores lent a hand in the silent auction room while freshmen worked hard to bus tables and keep the venue sparkling.
Live entertainment was provided by the spot-on cover band “Fourever Fab” performing the best of “The Beatles” on the Grand Expedition stage.

With over 200 items in the silent and live auctions, a “lucky number” drawing for 3 iPad products, and a “wine pull” there were many opportunities to bid often and give generously in support of the school.
Mahalo nui loa to all of our attendees.  See you next year at Grand Expedition 2016.