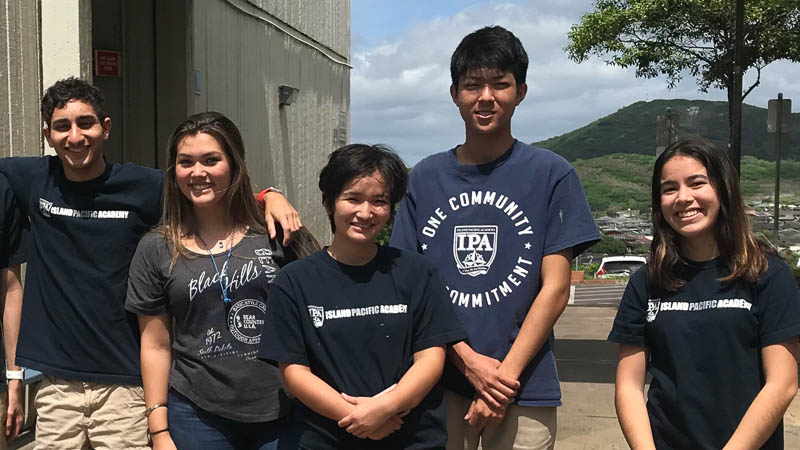 The IPA Mathletes opened their season on Saturday, September 22, with a competition at Moanalua High School. IPA competed against 20 schools in their division, and they performed very well.

The Varsity squad entered the last event in 2nd place hoping to clinch their first ever meet championship. They put in a great effort and came in 5th place, just 12 points behind the winners. Though the squad has finished higher in past competitions, this was the closest they’ve come to winning a meet. The top finishers were the teams from Waiakea, Waipahu, Kaimuki Christian, and Kamehameha – Hilo.

The IPA Junior Varsity Mathletes finished a strong 13th place out of 22 schools. The JV division includes all schools, with ʻIolani, Punahou, and Waipahu finishing in the top three spots.

The second meet of the season for the IPA Mathletes will be held at Kailua High School on October 20, 2018. The events and topics for the second competition include Algebra 2: Ratio, Proportion, and Variation; Geometry: Similar Triangles; Algebra 1: Linear Equations with One Variable; and Trigonometry: Equations & Graphs.

Good luck to all our IPA Mathletes!

#FBF IPA’s wonderful Elementary teachers let their students know they’ll always be there for them in this special end-of-the-year video. We miss these amazing educators! ow.ly/SbgT50An9lR #ipahawaii #weareinthistogether #distancelearning

On IPA’s Make a Difference Day, secondary students give back by volunteering at community organizations. This year students did beach clean ups, worked a lo’i & took care of their own campus. ow.ly/4iOe50An6QO #ipahawaii #ipagivesback #communitycounts #makeadifferenceday pic.twitter.com/uzVhUPN5SG

IPA’s rising Gr 4 student Ozzie was featured as the “Kidcaster of the Week” on @HawaiiNewsNow. The Grade 3 class completed their unit on weather this spring through distance learning. Nice work, Ozzie! #kidcaster #hnn ow.ly/C3gO50AmtA3