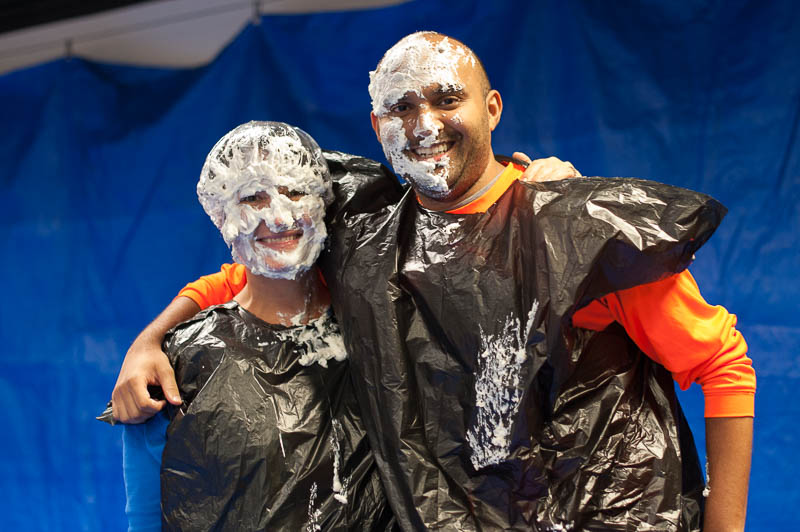 IPA Teams Up with ‘Ilima to Raise Awareness for Alzheimer’s

September is World Alzheimer’s Awareness Month, and on Friday, September 1, ISLAND PACIFIC ACADEMY partnered with our neighbors at the ʻIlima at Leihano Senior Living Facility to raise money for the Alzheimer’s Association. IPA students, faculty, and staff participated in a “Go Purple” day, in which everyone wore purple tops to raise awareness for Alzheimer’s, help fight the stigma surrounding the disease, and educate others about Alzheimer’s.

A joint fundraising effort between ʻIlima at Leihano and IPA included participation in the “Walk to End Alzheimer’s” on Saturday, September 2 at Magic Island, and a fun “Pie Your Teacher” raffle for the middle and upper school students. Students were able to purchase $1 raffle tickets for a chance to “pie” their teacher in front of the entire Secondary school in a special assembly in the MPR on Friday.

Volunteer faculty members were good sports as they donned plastic garbage bags, shower caps, and even snorkel and mask in preparation for a whipped cream pie in the face. One of the residents from ʻIlima at Leihano was present as the guest of honor, and she had the privilege of drawing the names of the lucky students.

ISLAND PACIFIC ACADEMY and ʻIlima at Leihano raised nearly $1000 for the Alzheimer’s Association, and the students and faculty had a great time!

Mr. Marchetto-Ryan, Mrs. Healey, and Mr. George held no grudges after their pie-to-the-face.

The students loved it!

Secondary Principal Mr. Caley gets thoroughly “pied” – beard and all.

The guest of honor from ʻIlima at Leihano pulled students names from the raffle for the chance to “pie” their teachers.

Mrs. Dul and Mr. Kash are nearly unrecognizable under all that whipped cream.

The students seemed to really enjoy getting revenge on their teachers!