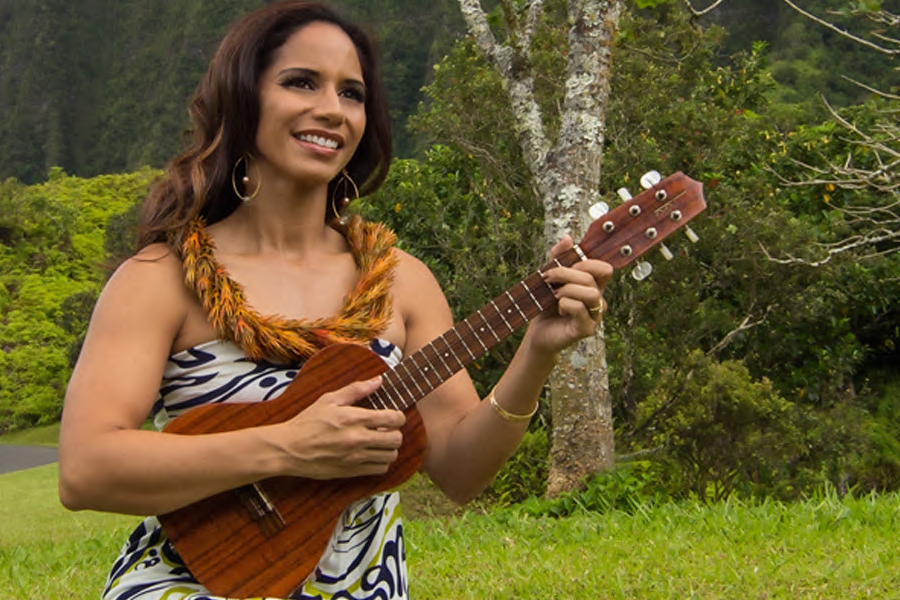 The granddaughter of “Auntie” Genoa Keawe, Pōmaikaʻi Keawe Lyman, shared a legacy of Hawaiian song and language with Island Pacific Academy high school students as an honored guest in the IPA Performance Series.

Born and raised on O’ahu, Pomaika’i grew up in the same house with her grandmother, Aunty Genoa Keawe.

A sound piece of the past seems to haunt the soul as you listen to the voice of this young woman that resembles a beloved Aunty Genoa Keawe in her younger years–a woman she affectionately refers to as “Tutu.” As a young girl, Pomaika’i was able to learn and develop the unique style of “ha’i” that her Tutu mastered and performed throughout Hawai’i and many parts of the world. Now, many who enjoy listening to Genoa Keawe’s music are pleased to learn that Pomaika’i has accepted the honor and kuleana of carrying on this musical tradition and legacy.

“My dad was the 11th of her (Genoa Keawe) 12 children and he was the one who took care of her when my grandfather passed away.  My room and my grandmother’s room were right across the hallway from one another,” she shared while answering a student’s question about who inspired her to become a musician. “I got to tag along with my dad and go to her performances.  I watched my grandmother go through all these experiences performing for people.  I realized she was getting to do what she loved, have fun, be compensated, and be rewarded by by seeing how people were affected when they listened to her music.  People loved what she did, how she sang, and they would walk up to her and tell her how they felt after hearing her sing.”

Pomaika’i relaxes after the performance session and then took time to autograph a photo for the school’s growing photo wall of visiting artists.

By middle school, Pomaika’i was taking along her ukulele to strum and sing between classes.  “My friends and I grew up listening to the Ka’au Crater Boys and songs like ‘Surf’ we learned to play perfectly,” she shared. Pomaika’i attended Punahou (’99), where, despite trying out for hula director, she was selected to be a musician for the Holoku program.  That’s when Tutu Genoa helped to make sure that lyrics were correct, phrasing was done properly and her pitch was at its best. Through these one-on-one sessions, Pomaika’i’s voice matured and developed in the “Genoa Keawe” style of singing, marked with the ha’i. Before Tutu Genoa passed in 2008, Pomaika’i had the opportunity to perform with her both locally and abroad.

Pomaika’i (pictured above) graduated from Brigham Young University in Provo, Utah with a Bachelor of Science in Economics (Class of 2003). After returning home from BYU she married Shane Lyman.  They have four children and Pomaika’i is passing on her appreciation for Hawaiian Music to her keiki, all of whom have expressed interest in continuing the family legacy.

Genoa Keawe’s granddaughter had some advice for students considering a career in music. “If you’re interested in music, just pursue it. Music is a part of everyone’s lives. We listen to it. We listen to certain songs when we are angry, hurt, heartbroken, or in love. Music is all about bringing frequencies, vibrations, together in a way that enhances our feelings,” Pomaika’i explained. “Once you step on that stage though it’s not about you, how high of a note you can sing, how long you can hold a note, or whether you’ve had a good or bad day. It’s about the message you are delivering to the audience and how you make them feel.  They may not remember or even understand all of your words, but they will remember how you made them feel.”

She also challenged the students to think about the choices they make in their lives. “Your work in music can be as a singer, a percussionist, or a technician.  Listen to the music that interests you but realize that whatever you surround yourself with is what you will pick up most easily.  Be mindful of what you listen to, who you spend time with, or even what you watch on YouTube,” Pomaika’i said to the students at the end of the session.

Pomaika’i has performed regularly at many Waikiki establishments, including the Royal Hawaiian Hotel, the Kahala Hotel and Resort, and the Outrigger Reef.  She donates much of her time and talent to many non-profit organizations, particularly those relating to Hawaiian Language Immersion education. All of her children are graduates of Punana Leo, and all currently attend Ke Kula o Samuel M. Kamakau, a private charter school in Kane’ohe.

For the past three years, she has presided over the committee that plans for Ho’omau O’ahu, a benefit concert to support Hawaiian Language medium education institutions (13 on the island of O’ahu). Her passion for Hawaiian Language education stems from the example of her Tutu, who was an avid supporter of the language movement in order to keep the culture alive.

Currently, Pomaika’i performs with Gary Aiko, Momi Kahawaiola’a, and Alan Akaka at the Waikiki Beach Marriott Resort & Spa‘s Moana Terrace every Thursday evening from 6:30 – 9:30PM. Her father, Eric Keawe, manages the quartet, known as The Keawe Ohana. They continue to maintain the “good-fun style” of Hawaiian Luau entertainment with their music and audience participation for those willing to share talent in song and dance.