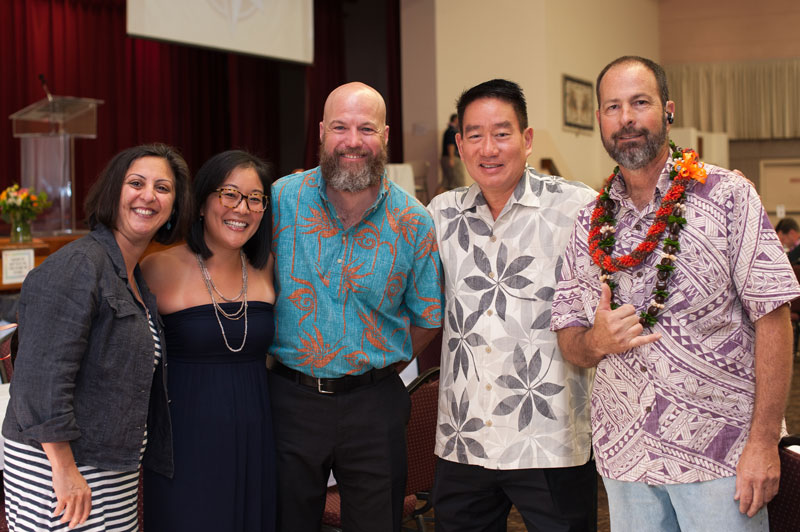 ISLAND PACIFIC ACADEMY held its inaugural Athletic Banquet on May 7, 2017 at the Hawaiʻi Okinawa Center. All student athletes from grades 7 – 12 were recognized for their efforts and achievements over the course of the 2016-2017 school year at the special dinner hosted for the athletes and their families. More than 220 of our IPA ʻohana turned out for the evening’s festivities.

Sport-themed centerpieces created by Lisa Dalida (Administration) and Alyssa Kuffel (Track & Field coach and middle school science teacher) decorated each table at the banquet. The Swimming centerpiece even had a live goldfish.

Hosted by Mike Axelrod, Director of Athletics, it was a fun evening with food, raffle prizes, and the “IPA Athletics Trivia Challenge with Egg Roulette,” which is sure to become an annual tradition.

Each student athlete was given entry to the raffle prize drawing, with a chance to win one of many excellent prizes, including a VR headset, Skullcandy wireless headphones, Amazon Fire Sticks, a Fitbit, and a GoPro Hero camera. The prizes were a big hit with the students!

Luke Garcia (’21) turns in his raffle ticket for a new Fitbit.

As the evening’s main entertainment, guests were divided into two teams to play “IPA Athletics Trivia Challenge with Egg Roulette.” Never heard of it before? Here’s how it’s played: teams are asked a trivia question about the IPA Athletic Department; the first team to answer correctly wins a collective pat on the back; the losing team gets the enjoyment of watching their team “Coach” play “Egg Roulette,” which involves randomly picking an egg from a mixed dozen of hard-boiled and raw eggs and smashing it on your head.

Mike Axelrod and Coach Tommy were selected as the team “Coaches,” led by team captains Ashton Yamamura (’20) and Corbin Lofton (’20). Axelrod’s team didn’t fare very well, and Axelrod ended up with egg on his face many times, much to the enjoyment of the crowd.

Director of Athletics, Mike Axelrod, was unlucky in Egg Roulette, picking 3 of the 4 raw eggs in the dozen.

Axelrod picked 3 of the 4 raw eggs – and the crowd loved it!

“We have always had multiple events throughout the year this is the first time we have had one all-encompassing event and judging from our response this will not be the last!” said Axelrod. “It was great to come together to recognize the hard work and dedication of our athletes and coaches who represent IPA in competition in the ILH and state wide in the HHSAA.”

Each student athlete received a special certificate of participation for their sport at the end of the banquet. Some of the athletes who earned special recognition this year were:

Athlete Certificates of Participation ready to be awarded.

Elise Pangelinan (’18) and her parents.