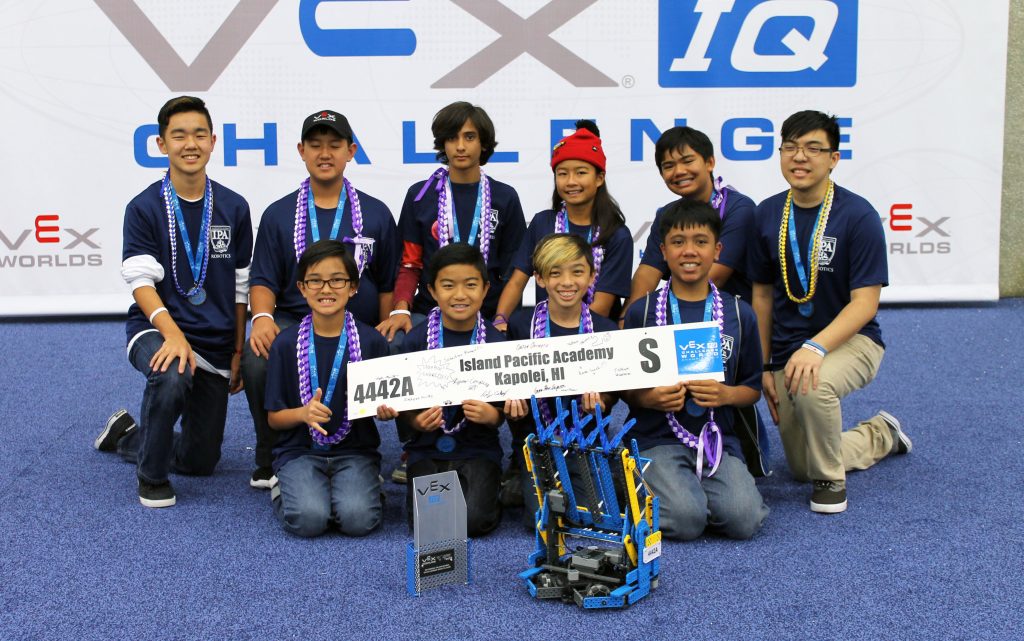 The pressure was intense as ISLAND PACIFIC ACADEMY’s VEX IQ Navigator Robotics team competed against the best of the best from around the world. More than 300 middle school teams traveled to the Kentucky Exposition Center for the 2017 VEX IQ World Championship in Louisville. IPA’s Navigator Robotics was one of eight teams from Hawaiʻi to compete in Kentucky.

The three-day tournament on April 23-25 was a test of endurance and skill, where two teams compete in minute-long matches split across four divisions. Each division consisted of 77 teams, and within their division, Navigator Robotics: Team 4442A placed fourth,  with students Nathan Okimoto (’22), Taylor Horita (’22), Zaheer Gulko (’22), and Emma-Rose Layaoen (’22) winning the Division Finalist Award with their alliance from Hong Kong.

Once the competition was over and the season officially finished, the team got to view the new game: 2017-18 VEX In The Zone and 2017-18 VEX IQ Ringmaster. This was the official start of the next season and the Navigator Robotics team looks forward to embarking on a new challenge.

Just a week after returning from their trip, the Navigator Robotics team ran the Ellison Onizuka Day of Exploration Tournament at the Neal S. Blasidell Exhibition Hall. The eight-team tournament consisted of Boy Scouts from around the state looking for an opportunity to get involved in STEM.

We are proud of our students and mentor, Robyn Cabuslay (’14) for representing IPA in a world setting. Thank you to all Navigator Robotics families for your support throughout this VEX IQ season. We look forward to seeing you in the next year.