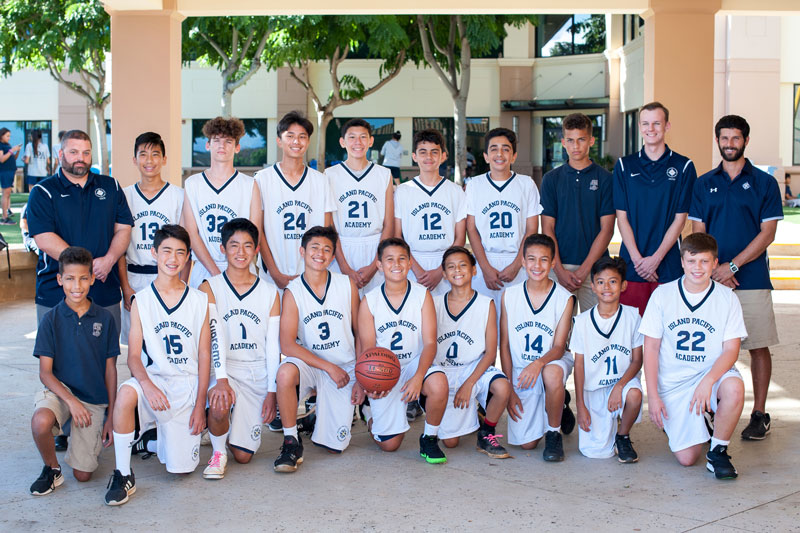 Under Head Coach, Andrew Marchetto-Ryan, and Assistant Coaches Steven Cleveland, Seth Brownold, and Andrew Merriman, the Navigators played well throughout the game, with the score close through the final few minutes. With just under two minutes remaining, Andrew Lu (’22) was able to pick up the rebound off of Preston Yoshino’s (’23) missed foul shot and put it up for two, giving IPA the lead. As Christian Academy took possession, Yoshino was able to steal the ball and pass it ahead to Chad Schmidt (’22), but the pass went off his finger tips and out of bounds giving Christian Academy possession again and a chance to tie or take the lead. IPA maintained composure and Lu applied pressure to force a turnover, giving IPA possession of the ball with a two-point lead. On the next play, Keanu Chambrella’s (Lanakila Baptist Academy ’22) perfectly placed pass to Lu allowed him to drive the lane and score putting IPA up by four. The Navigators immediately forced another turnover on Christian Academy’s possession, and Madden Kamahele ’23) was quickly fouled. Kamahele hit one of two, extending IPA’s lead 53-48. Christian Academy showed their perseverance, hitting a quick three-pointer cutting IPA’s lead to one basket at 53-51. Lu was quickly fouled by Christian Academy as the ball was put into play, putting him at the free-throw line with only 5.9 seconds left. With IPA fans on the edge of their seats, Lu missed his two, but Chambrella came down with the rebound for IPA. Kamahele was again fouled, giving him a second chance at the line. With one second left on the clock, he sunk his first free throw, and then missed his second shot to run out the clock. IPA was the winner with a final score of 54-51.

“Iʻm really proud of how all of our student athletes performed this season, putting in the hard work on the court during practices, and coming together as a team during all our games,” said Coach Marchetto-Ryan. “They were all outstanding players, representing ISLAND PACIFIC ACADEMY in the best way possible. This was a great way to end the season.”

The road to the championship included matches against Assets School, Damien Memorial School, Hawaiʻi Mission Academy, Hawaiʻi Baptist Academy, Christian Academy, and Hanalani Schools. The team finished off their successful 2018-2019 season with an 11-1 record, with their one loss delivered by Hawaiʻi Mission Academy, 44-47.  The Intermediate boysʻ team captured the Division III title for IPA for only the second time in the school’s history. IPA last held the title in 2014.