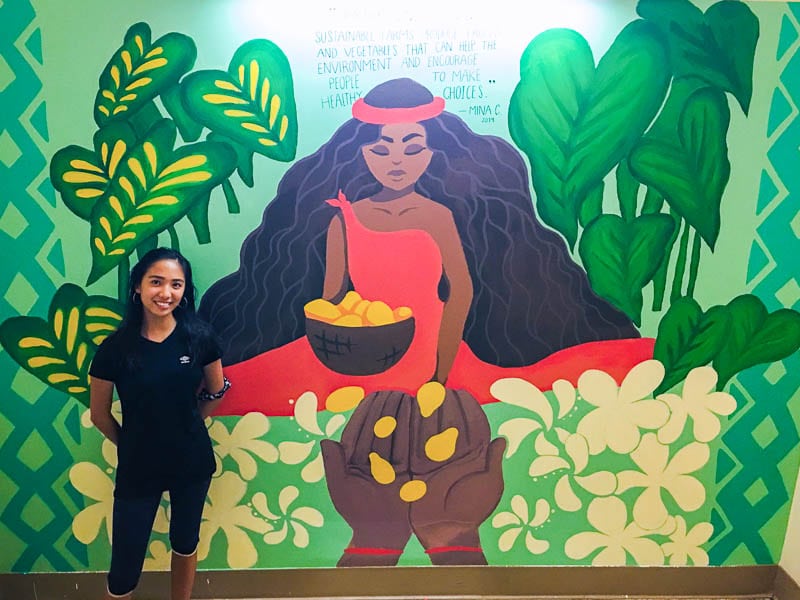 Three colorful and inspiring murals painted by ISLAND PACIFIC ACADEMY students now brighten up the walls of the main stairwell at The Queen’s Medical Center – West Oʻahu. The mural projects were a part of the goal of Queen’s – West Oʻahu to become Blue Zones Project certified, in partnership with The Blue Zones Project – Ewa/Kapolei.

The Blue Zones Project is a national initiative introduced to Hawaiʻi by the Hawaiʻi Medical Service Association (HMSA). The initiative promotes healthy habits by helping people easily incorporate the best practices of the Blue Zones (Okinawa, Nicoya Peninsula, Ikaria, Sardinia, and Loma Linda) in the places they live, work, and play. It includes using the Power 9 – the nine secrets of longevity – to improve quality of health and life, and includes things like moving naturally, eating wisely, connecting with others, and having a sense of purpose. With their certification, Queen’s – West Oʻahu becomes only the second health care facility in the nation to earn the designation of a Blue Zones Project Certified Worksite. ISLAND PACIFIC ACADEMY is also working towards building a healthy community, with the Grade 5 Student Action Committee helping IPA think of ways we can adopt some of the best practices of the Blues Zones on our campus.

Last year, Queen’s – West Oʻahu invited all IPA students to submit artwork representing what healthy living in West Oʻahu means to them. Three designs were selected, and those three IPA students (Annie Uesugi ’19, Mina Cintron ’20, and Taj Tottori ’26) had the honor of painting their artwork as full-wall murals in the hospital stairwell. The idea behind the murals was to transform the plain, drab stairwell into a colorful and inviting space that would encourage staff and visitors to take the stairs instead of the elevators.

The three murals represent different facets of healthy living. Uesugi’s mural of a doctor expressing a healing touch depicts the importance of connecting with others. “I believe healthy living starts with good emotional connections with people and with trust, especially with health care professionals,” writes Uesugi. “I wanted to show that both doctors and patients have unique souls and ideas that can merge, and help each other thrive and become more than they were separately.”

Cintron’s mural shows a woman collecting fruit from the land and represents the importance of sustainability in healthy living. “My idea of healthy living is having sustainable farms produce healthy fruits and vegetables for the island of Oʻahu,” she shares. “Providing and growing the fruits and vegetables can help the environment and encourage people to make healthy eating choices.”

“The Veggie Run” mural by Tottori is a fun representation of the importance of vegetables in a healthy diet. “All the vegetables are running away because they are going to get eaten since they are so healthy,” Tottori explains. “It’s important to eat healthy foods that are good for your body.”

From November 2018 to March 2019, the students worked on their murals, devoting time on Saturdays and after school. They were assisted by classmates, ceramics teacher Warren Andrade, and Advancement Coordinator Amber Camacho. The final murals were presented to the public in conjunction with the announcement of the The Queen’s Medical Center – West Oʻahu Blue Zones Project certification. The murals, in addition to other projects implemented by Queen’s – West Oʻahu, help to improve the health and well-being of the medical center community by making healthful changes to their environment. ISLAND PACIFIC ACADEMY is proud to partner with members in our community to help effect positive changes that benefit all. 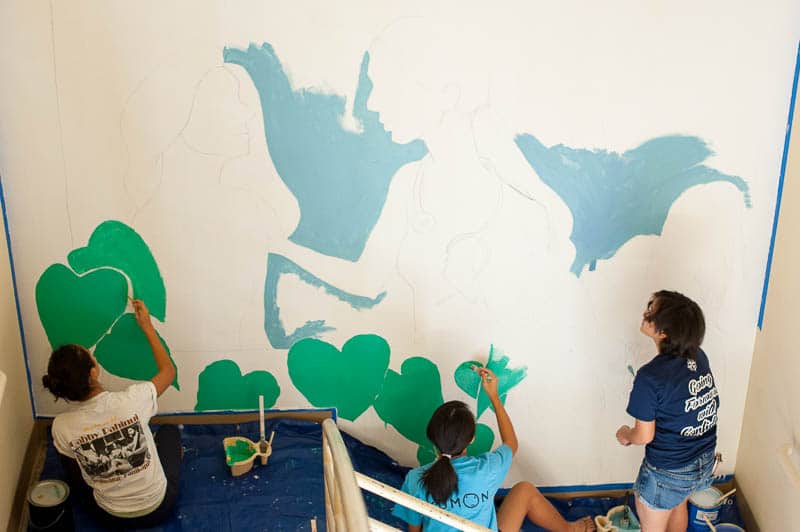 Annie Uesugi ’19 starts painting her sketched design with the help of her classmates. 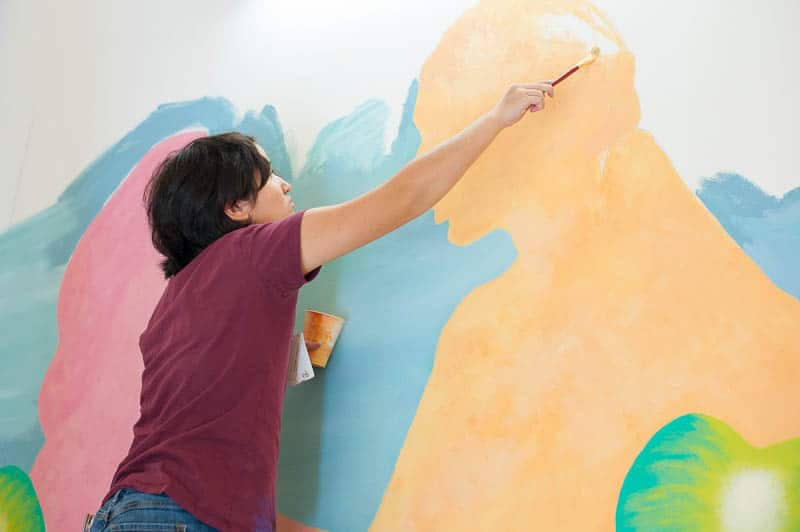 Annie Uesugi ’19 works on painting her mural in the stairwell at Queen’s – West O’ahu. 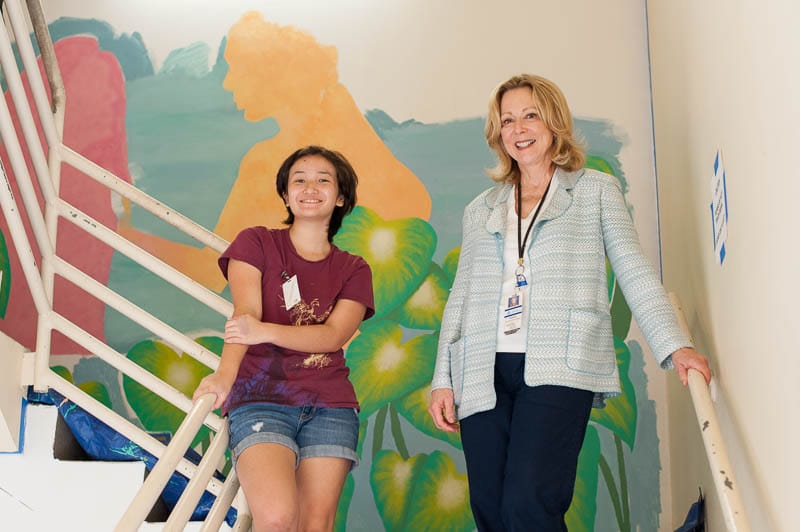 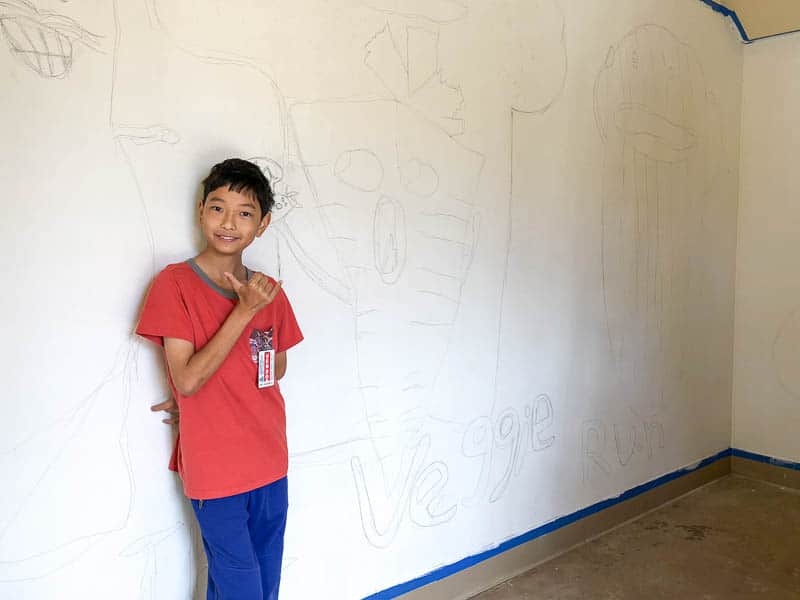 Taj ’26 stands before his mural sketch of “The Veggie Run” on the ground floor. 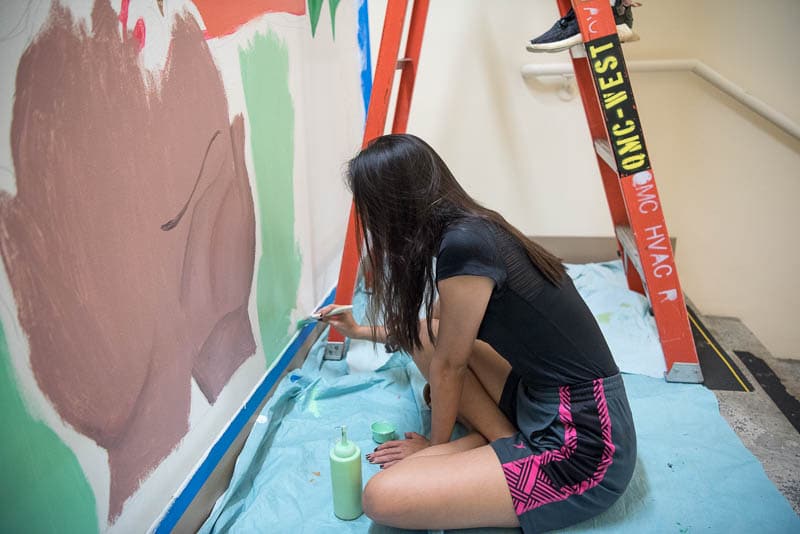 Mina Cintron ’20 works on the lower half of her mural on the 5th floor of the stairwell. 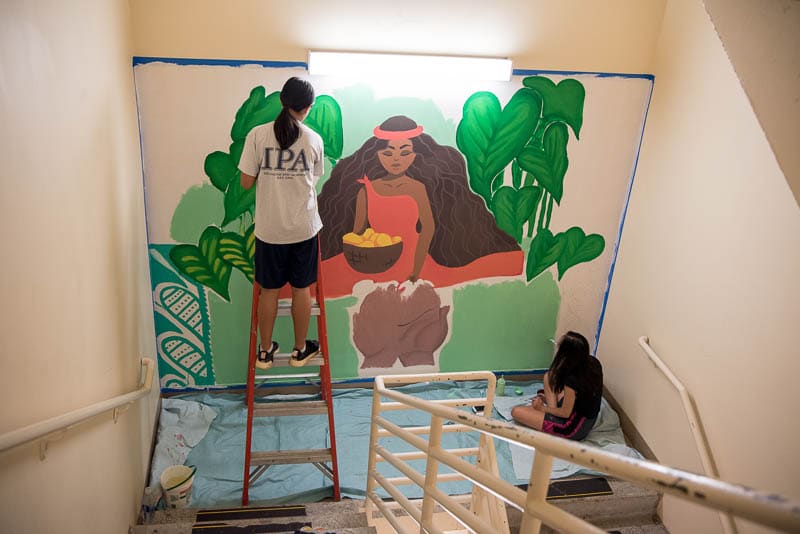 Mina Cintron ’20 works on her mural of sustainability with a classmate. 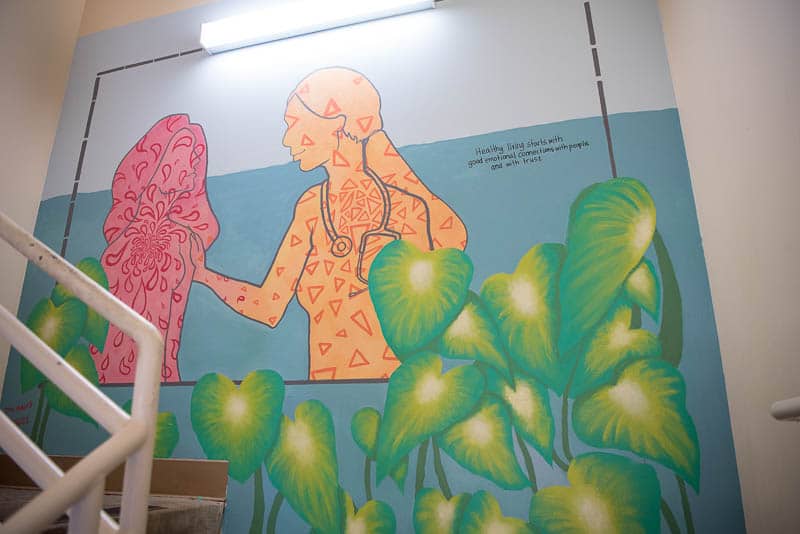 Annie Uesugi’s completed mural on the 1st floor landing of the stairwell. 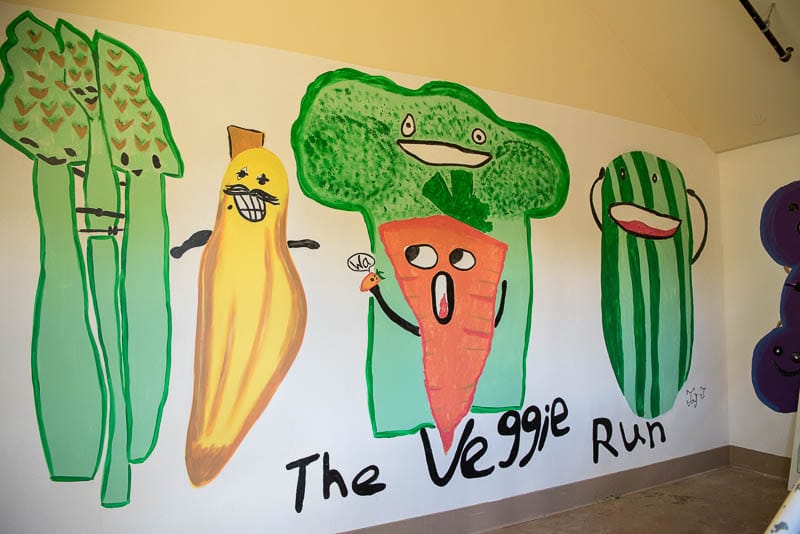 Taj’s fun mural on two adjacent walls of the stairwell.

Mina Cintron stands in front of her finished mural on the 5th floor stairwell landing.