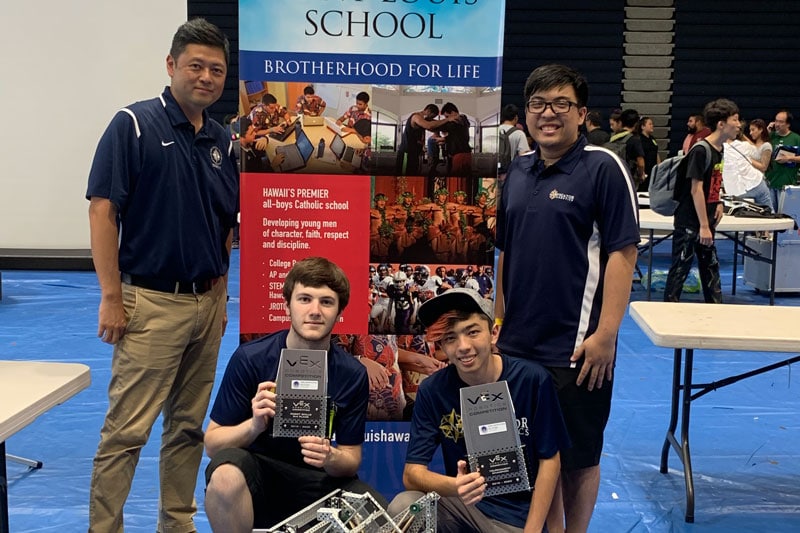 On July 17-18, 2019, ISLAND PACIFIC ACADEMY’s Navigator Robotics, team #4442X, had tremendous success at the 2019 VEX VRC Signature Event, the Mark Leon Invitational.  This was the first World Championships qualifying tournament of the season. The qualifier, called the Excellence Award, is given to the team that places at the top of multiple criteria. Besides on-field performance and skills performance, the Excellence criteria includes documentation quality, sportsmanship, and face-to-face interviews.

The Navigator Robotics team was considered a contender for the Excellence Award, but it ended up going to another school. In the end, the Navigators won the Tournament Championship and 2nd Place in the Skills Challenge. 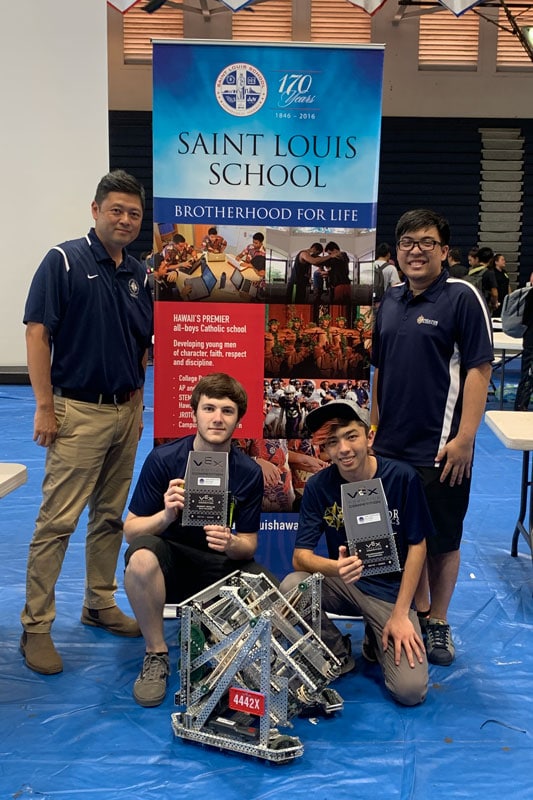 The competitive field of 25 teams was comprised of six teams from China, seven US teams from California, Texas, Minnesota and Connecticut and 12 teams from the Aloha State.

The Navigators started off the first day of qualification matches with three straight losses. Despite the slow start, they were able to get into the win column, eventually going undefeated for the rest of the tournament. IPA had the toughest strength of schedule, facing five of the top six ranked teams throughout the qualification rounds. To put it into perspective, the top six teams only averaged two matches facing the top six. IPA’s record of 7-3 was good enough to get them ranked #8 in regulation.

The alliance selection process to determine the playoffs resulted in the same outcome as the prior tournament just a month ago. Powerhouse Pearl City High School, team #4142B, selected IPA to be their alliance partner. In their quarterfinal match, this #1 ranked alliance was able to surpass teams #843H (from Minnesota) and #4109A (808 Robotics) 26 to 18. Their semi-final match was against a familiar opponent, team #42700D (The Crusaders) and team #3303D (California). IPA and Pearl City were able to move on with a score of 46 to 21. The last match against teams #25461Z (Texas) and #21000C (California) proved to be an exciting finals. The scoring went back and forth as IPA fended off both teams while controlling the towers, thereby allowing Pearl City to score three tall stacks. The final score of 64 to 48 was the highest combined match score of the tournament.

Navigator Robotics #4442X is coached and mentored by Jeff Sumitani, Robyn Cabuslay, and Kyle Okimoto.  Navigator Robotics will be preparing for their next tournament – the East Oahu Vex Robotics Competition at Sacred Hearts Academy on August 17, 2019.

Mahalo for your continued support of the Navigator Robotics Team.